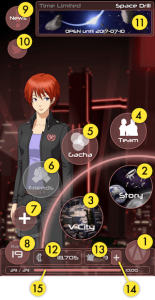 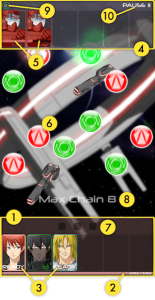 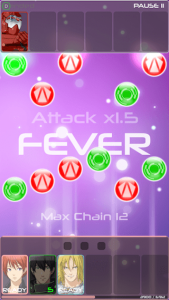 Fever mode: if you connect 12 chains, you will reach the maximum attack power (x1.5 times the original attack). 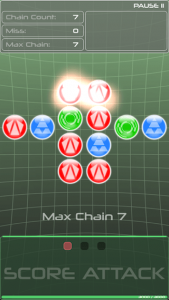 Connecting chains will multiply your points. Note: getting hit won’t break the chain. 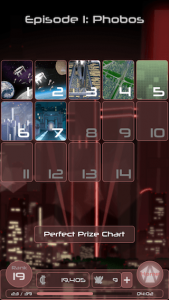 The story mode is divided in chapters, and each chapter in missions. You will unlock more chapters by going through the missions. 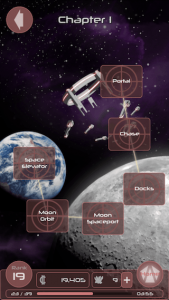 Inside each chapter, there is a map with locations for the missions. Inside each location there will be up to four missions, some of the main story, some substories from characters. 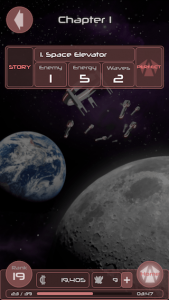 On each one you will see the information about the mission: the name of the mission, if it is from the Main Story or Substory (in which case will appear a photo of the character), the required Energy, the level of the enemy and the number of waves. Finally, if the mission is New, is Clear (already done) or Perfect (got a perfect). If you haven’t a perfect yet, you will see the reward for that mission. (Available rewards: Credits, Friendship Points (FP), Mineral, Cards.) 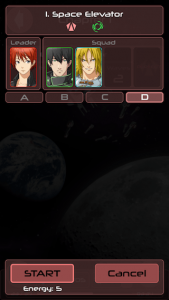 Before entering in the mission, you will see the briefing screen. Here you will see information about which enemies are you fighting by the logos shown under the mission name, the selected team and again, the amount of energy required to play the mission. 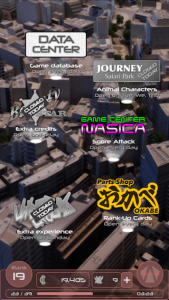 V-City is divided in shops. Some of the shops open every day, other only open some days of the week. 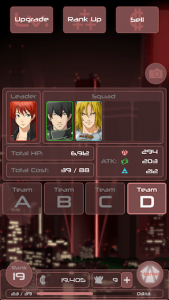 There is information about the total HP of the team, and the attack strength for each side. You also have a max cost. This limits the amount and rank of the characters you can use at the same time. Stronger cards have higher cost.

Try to keep your HP and attack power as high as possible without surpassing the maximum cost. Keep in mind the character skills can be of great help during the battle. A long touch or a force touch (only on devices with 3D Touch) will show you the character information. 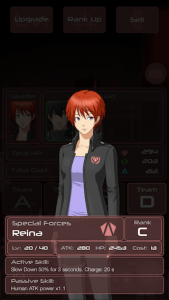 To take out a character from the team, swipe it up. You can erase all the characters except the leader slot.

To add or change a character, tap on any slot. You will access to your character list. 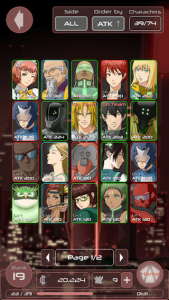 If you touched a character instead of a empty slot, it will show a “Selected”. The characters on the Battle Deck will show a “On Team” banner. 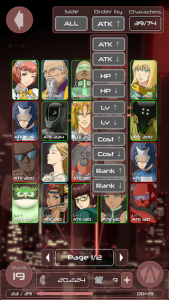 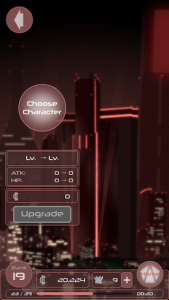 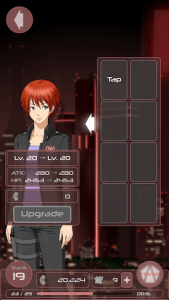 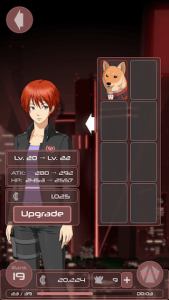 Once selected, push the “Upgrade” button. You will get a warning when trying to upgrade with high ranked cards (B or upper). You can not use a protagonist (Reina, Shin or Achilles) to upgrade other characters.

If you want to upgrade a different character, touch over the first character to change it.

Upgrading cost credits. You can check if you have enough credits before doing the upgrade.

You cannot upgrade anymore if the character reach his level max. To make bigger the level max, you will need to “Rank Up” the character. 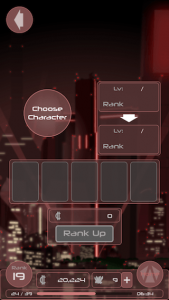 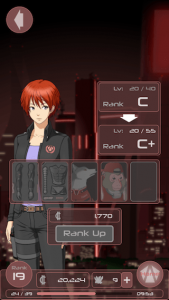 Ranking up will allow you to make the level max of the character bigger. You can do it twice for each character. Rank will change showing a + for the first rank up, and a ++ after the second one. It is not possible to rank up further than that.

Tap over “Choose Character” to select the character to rank up. Under the character will appear the required characters and part cards to do the Rank Up. Please note you need to have the character at his top level.

If you want to rank up a different character, touch over the first character to change it.

Ranking up cost credits. You can check if you have enough credits before doing the rank up. 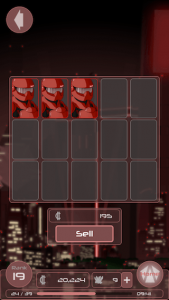 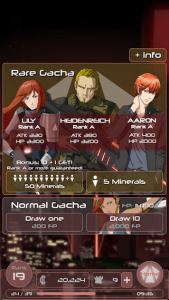 On the gacha section, you will be able to draw characters. The characters you receive will appear randomly based on their rank. The higher the rank, lower probabilities to appear. The probabilities are displayed inside the “+ info” section (upper button).

There are two types of gacha:

Not available on this version. 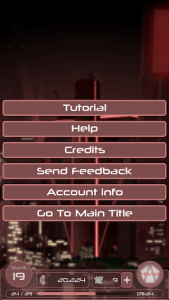